Thomas Custer Earned Two Congressional Medals of Honor and almost no one knows who he is. 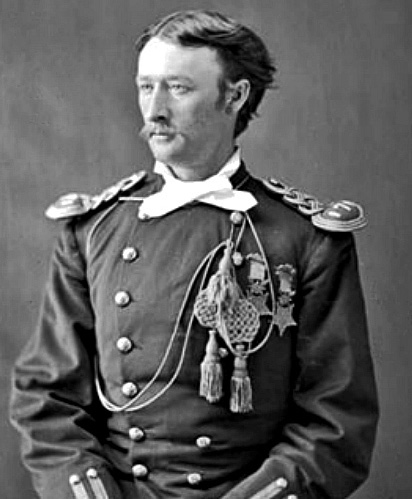 3500 soldiers have earned the Congressional Medal of Honor in the 250 year history of our country. 16-year-old Tom Custer wanted to join his brother Brevet General George Armstrong Custer, who gained a reputation as the bravest cavalry officer in the Union, every bit a match for Rebels JEB Stuart and Nathan Bedford Forrest. Well, though seldom remembered today Tom Custer was as brave, if not braver, than his brother. Starting with fake papers at the age of 16-years-old Tom enlisted with the rank of private, Tom received promotion after to promotion, finally being culled and assigned to US Grant's Command Staff and promoted to the rank of Major just in time for the Richmond Campaign. Pretty good for a 20-year-old young man. As Grant drove Lee's troops from Richmond to Petersburg, finally to Appomattox, both Custer brothers proved brilliant and courageous.But almost no one knows about Tom's courage. At one of the first engagements, the Battle of Namozine Church, in Grant's final push, Tom Custer charged the Confederate command and control of his entrenched opponents, single handily killing several Confederates, capturing 11 soldiers and officers, a canon and battery and finally their Regimental Flag. For this bravery, Tom received his first Congressional Medal of Honor. At the Battle of Sailor's Creek, almost exactly the same situation occurred again. Alone Tom charged his opponent's command and control, shooting several rebels, including the commanding officer, in the process capturing his second regimental flag before being shot himself. For this, Tom Custer was not only one of the youngest soldiers to ever win a Congressional Medal of Honor, he then became the first American Soldier in history to win TWO CONGRESSIONAL MEDALS OF HONOR. 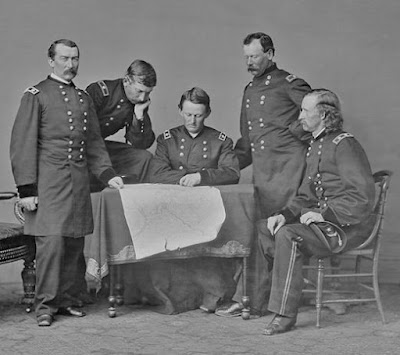 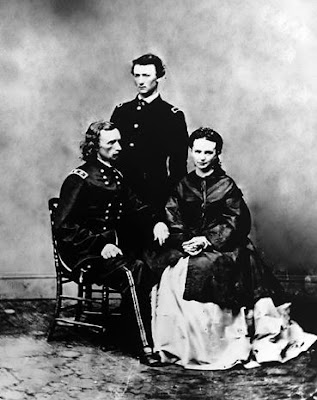 
Stuart's last obstacle was Custer, with four hundred veteran troopers of the First Michigan Cavalry, directly in his path. Outnumbered but undaunted, Custer rode to the head of the regiment, "drew his saber, threw off his hat so they could see his long yellow hair" and shouted... "Come on, you Wolverines!" Custer formed his men in line of battle and charged. "So sudden was the collision that many of the horses were turned end over end and crushed their riders beneath them...." As the Confederate advance stopped, their right flank was struck by troopers of the Fifth, Sixth and Seventh Michigan. McIntosh was able to gather some of his men from the First New Jersey and Third Pennsylvania and charged the rebel left flank. "Seeing that the situation was becoming critical, I Captain Miller turned to Lieutenant Brooke-Rawle and said: "I have been ordered to hold this position, but, if you will back me up in case I am court-martialed for disobedience, I will order a charge." The rebel column disintegrated into individual saber and pistol fights. Within twenty minutes the combatants heard the sound of the Union artillery opening up on Pickett's men. Stuart knew that whatever chance he had of joining the Confederate assault was gone. He withdrew his men to Cress Ridge. Custer's brigade lost 257 men at Gettysburg, the highest loss of any Union cavalry brigade. "I challenge the annals of warfare to produce a more brilliant or successful charge of cavalry", Custer wrote in his report. "For Gallant And Meritorious Services", he was awarded a regular army brevet promotion to Major.

General Stuart had 9500 cavalry officers under his command, while General Custer stalemated and thwarted Stuart's Confederate Cavalry with 400 Michigan Wolverines. Generals Grant and Sheridan gave Custer much credit for helping win the Battle of Gettysburg. General Robert E. Lee had intended to use JEB Stuart's forces to divide the Union Army and aid Pickett's Charge.

Not to say George Armstrong Custer wasn't brave, he skyrocketed up the chain of command through incredible bravery on the field of battle and he earned battlefield promotions at both Gettysburg and the Calvary Battle at Brandywine Station. In recognition of Custer's brilliant contribution in the final drive to victory, from Gettysburg to Appomattox Courthouse, General Sheridan presented the table upon which General Lee's surrender was signed pictured here. The wicker chair was General Robert E. Lee CSA and the wood and leather chair General US Grant's at the surrender. 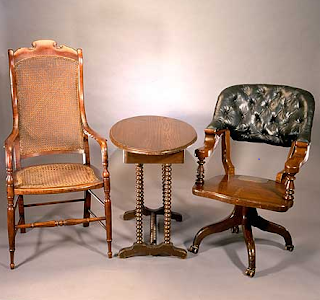 Whatever your feeling of the Indian Wars, fostered by a policy of the Gilded Age's Manifest Destiny, that the White Man was meant to occupy North America from sea to sea. Soldiers simply follow orders and do as they are told. Both George Armstrong Custer and Tom Custer were brave and died the way a real soldiers should die, in service to their country, right or wrong.

"Homo sum, humani nihil a me alienum puto" translates from Latin, I am a man, nothing human is alien to me.  Word written by Roman Playwright Publius Terentius Afer (195 BC - 159 BC), which been a mantra of humanists for 2200 years, meaning all mankind are my brothers and sisters. Terence was born a Carthaginian slave after the 2nd Punic War with Hannibal. Punic is derived from the Latin Punici, Carthage was founded by Phoenicians, Punici is Latin for Phoenicians. Afer means from Africa. Terence was from north Africa, modern Libya. Carthage was the greatest enemy Rome ever had. Hannibal and the Carthaginians came very close to conquering Rome, devastating the whole Italian peninsula for 20 years, winning 28 battle in a row, killing 100,000's of Romans. Then Roman General Scipio Africanus decided the best way to beat Hannibal was to follow his example, he invaded Carthage, in modern Tunisia, and defeated Hannibal at Zama, destroying his, until then, undefeated army. Hannibal had premonition of disaster, after having defeated the Romans at Cannae, killing 50,000 Roman Legionnaires, Hannibal then laid siege to Rome itself. The Romans held a regularly scheduled land auction of the land on which Hannibal's Carthaginian Army was camped. The land brought  a record price. Hannibal hearing of the auction, was stunned, any other enemy would be terrified and suing for peace. Romans laughed in his face. Though Roman parents would for centuries afterwards tell their children if they were bad, Hannibal would come get them. A quote
Roman Senator Publius Terentius Lucanus was so impressed by Terence's intelligence that Lucanus educated and freed the boy. He became Rome's greatest playwright and a close personal friend of General/Senator Scipio Africanus, conqueror of Carthage.

Of Julius Caesar, Shakespeare wrote, "Danger knows full well that Caesar is more DANGEROUS than he". 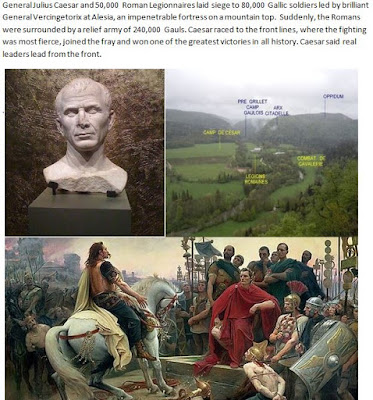 Caesar built a second wall surrounding the Gallic Mountaintop walled fortress of Alesia to keep the Gauls in  and starve them into submission. Romans were famous for their siege tactics. Caesar had begun building a third wall behind him, so if any Gallic Relief force came he had a defense against them too. Vercingetorix sent heralds, who escaped the city and evaded capture, to bring help. They rallied a relief army of 250,000 Gauls, which then surrounded Caesar's 50,000 Legionnaires.

In what is one of the greatest victories in history, Caesar and his Roman Legionnaires defeated the Gauls, Caesar joining his men in the front lines, where the fighting was most vicious and winning a victory for the ages.

An irreverent video which accurately explains the battle of Alesia and Julius Caesar.