Nikola Tesla the Most Brilliant Mind

One of the greatest geniuses of all time and probably the most unappreciated. Even if you split hairs about Marconi and the radio, Edison's DC and Tesla's AC, the fact is that his genius crossed every spectrum and challenged every other inventor. I disagreed when Time said that Einstein was the Century's Greatest Man, Tesla and Gandhi have had a much more profound influence on our lives than the theoretical physics of Einstein. That isn't to say Einstein wasn't in the top 10, but every time you turn on an appliance you are using Tesla's Alternating Current. A great man that
I will always remember and treasure. The bottom photo shows Tesla, unafraid of the immense power of electricity. Braver man than I am. But maybe he knew something I don't. 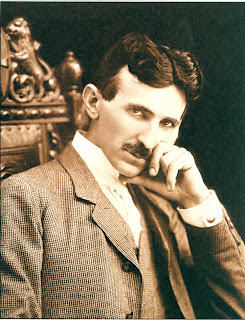 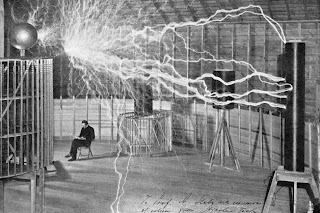 Though it may be apocryphal, it is an indication of the esteem in which Nikola Tesla was held by people who knew of him and the amazing things he did: Albert Einstein was asked by a reporter how it felt to be the smartest man in the world. He replied that you'll need to ask Nikola Tesla that question.
Posted by Brian Keith O'Hara at 4:19 PM No comments: