Truth is the Daughter of Time, the real Richard III 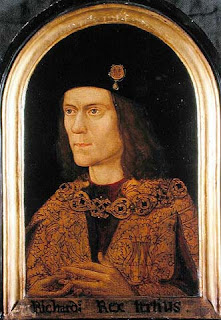 …the king will it to be ordained, by the advice and assent of the lords spiritual and temporal, and the commons, of this present parliament assembled, and by the authority of the same, that his subjects, and the commonality of this his realm, from henceforth in no wise be charged by no such charge, exaction or imposition, called a benevolence, nor by such like charge; and that no such extractions, called benevolences, before this time taken, be taken…of any of his subjects of this realm hereafter… - Statutes of the Realm, 1484

After Richard III's death, the Tudors became infamous for their spending, or in Henry VII's case, miserliness, both of which were predicated on extortion, theft and bribery.

Richard on the Battlefield


"His courage also high and fierce, which failed him not in the very death". - Polydor Vergil, Historian, 1520


"Such was his renown in warfare, that when ever a difficult and dangerous policy had to be undertaken, it would be entrusted to his discretion and his generalship". - Dominic Mancini, 1483


"For in the thick of the fight, and not in the act of flight, King Richard fell in the field, struck by many mortal wounds, as a bold and most valiant prince". - Croyland Chronicle Continuator, 1486


"King Richard alone was killed fighting manfully in the thickest press of his enemies". - Polydor Vergil


A Good King is missed by his subjects


…it was shown by divers persons, especially by John Sponer sent unto the field of Redmoor to bring tidings from the same to the city, that King Richard, late lawfully reigning over us, was…piteously slain and murdered, to the great heaviness of this city…

…as a singularly thoughtful and enlightened legislator, who brought to his task a profound knowledge of the nature of contemporary problems, and an enthusiastic determination to solve them in the best possible way, in the interests of every class of his subjects…H.G. Hanbury, 1962

"The good reputation of his private life and public activities powerfully attracted the esteem of strangers". - Dominic Mancini, Report, 1483

"On my trouth I lykyd never the condicions of ony prince so wel as his; God hathe sent hym to us for the wele of all..."
Thomas Langton - Bishop of St. David's, Letter to a friend 1483

"If we look for prudence in fostering peace and waging war, who shall we judge his equal?" - Pietro Carmeliano,Poet, 1484

In His Own Words

"...justly and duly administer the laws without delay or favor, (dispensing justice) indifferently to every person, as well as to poor as to rich". - Richard III - Address at Westminster, 1483

St. Thomas More wrote a history of Richard III, which he never published. Even when it might have aided him in his defense against charges of Treason brought by Thomas Cromwell, Thomas More's successor as Chancellor of England. These charges are now known to have been based on the perjury of Richard Rich who was acting at the direction of Thomas Cromwell the Lord Chancellor and Thomas Cramner the Archbishop of Canterbury, who were acting at the behest of King Henry VIII. For his perjury, Richard Rich was to succeed Cromwell and become Lord Chancellor.

Richard Rich had been a Apprentice to Thomas More when Lord Chancellor. Knowing a certain lack of ethics and character on Richard's part, More suggested that Richard Rich become a Teacher, best rendered by Robert Bolt's "A Man For All Seasons":

Thomas More to Richard Rich, "Why not be a teacher? You'd be a fine teacher; perhaps a great one."

"If I was," replies Rich, "who would know it?"
Thomas More, "You, your pupils; your friends; God. Not a bad public that."

Why did St. Thomas More never publish his history of Richard III?

Some have speculated that Thomas More became disenchanted with what he had been taught about Richard as a child. He was an apprentice in Cardinal Morton's household as a boy of twelve. Cardinal Morton was one of Richard III's enemies, a firm supporter of the Tudors. The only history he knew of those events came from this and other Tudor partisans. For over twenty years the manuscript lay unpublished among More's papers, Thomas More having made the choice not publish it. It was until long after his death that the Tudor Court received a copy of the manuscript. They then published it and it became the foundation for Shakespeare's Richard III.

Always remember that the extant portraits of Richard III have been retouched by Tudor Partisans to show a "hunchback", which apparently is made out of whole cloth, if the Countess of Desmond is to be believed:

Richard was the handsomest man in the room except his brother Edward, and was well made. - Countess of Desmond describing dancing with Richard, Reported by Horace Walpole, 1768

One aspect, which may have troubled Thomas, was that in all the charges that Henry Tudor brought against Richard III, not once did he accuse him of killing his twelve-year-old nephew, King Edward V and his ten-year-old brother, Richard. When Parliament declared Edward illegitimate and gave the crown to Richard, Edward was no longer a threat to Richard. But he was a threat to Henry Tudor(VII), because even if he overthrew Richard, that would put Edward V on the throne again, not Henry. Henry's whole rationale for becoming King was that Richard III usurped the Throne. And an odd coincidence, The Lord of the Tower of London in Richard's reign was Henry Stafford, The Duke of Buckingham. Henry was a relative of both the houses of Lancaster and York and himself stood in line for the crown. But he had the same problem Henry Tudor had. Overthrowing Richard would not make him King, but overthrowing Richard and killing Edward V and his brother, Richard, Duke of York could. Many have speculated as to whether Henry Tudor and Duke of Buckingham conspired together, or acted independently, but both are the main suspects in killing the Princes because they were the only ones who gained by their murder.

One of the main tenets in solving crimes is to first check to see who benefits from the crime, because they are always your best suspect. Richard III gained nothing from the death of Edward V and Richard Duke of York, but Henry Tudor and Henry Stafford did, because they became heirs to the throne on Richard's death....

All historians agree on one point, Richard III was the bravest man on the field at Bosworth. While Henry Tudor cowered behind a bodyguard of a hundred, Richard fought alone, bravely and without fear. At the end of the battle, when he knew the battle was lost(after the treachery of the Stanleys), Richard charged towards Henry, cutting a swathe through his host, only cut down in the last twenty feet of his quarry.

Henry ordered Richard's body stripped naked, then dragged behind a horse, ripped apart by rocks, thickets and bushes. That is not the way for the bravest man in a battle to be treated in death.

I think the first question that one should ask about Thomas More's "history" is not why he didn't finish it, let alone publish it, but why did he embark on the project in the first place? My own suspicions are that his buddy, Henry VIII asked him to write it, knowing that More had close ties to Morton and perhaps hoping to prove that Richard had the princes murdered.

I don't know if this is true or that it can be verified, but I remember reading somewhere that upon reading the work in progress, Henry ordered workmen to dig where More suggested the boys had been buried. However, they didn't find any bodies. If true, that may be why More then suggested the bodies were moved after a time.

I think the reason More didn't finish his "history" was because he wasn't able to substantiate anything--it was all hearsay, and his lawyer's mind found too many holes.

Found your blog from the richardiiisociety discussion group, hope you don't mind my commenting here.