A week before the Battle of Bull Run Sullivan Ballou, a Major in the Second Rhode Island Volunteers, wrote home to his wife in Smithfield.
July 14, 1861
Camp Clark, Washington, DC

Dear Sarah,
The indication are very strong that we shall move in a few days - perhaps tomorrow. And lest I should not be able to write you again I feel impelled to write a few lines that may fall under your eye when I am no more.
I have no misgivings about, or lack of confidence in the cause in which we are engaged, and my courage does not halt of falter. I know how American Civilization now leans upon the triumph of the government and how great a debt we owe to those who went before us through the blood and suffering of the Revolution. And I am willing - perfectly willing - to lay down all my joys in this life, to help maintain this government, and to pay that debt.

Sarah, my love for you is deathless, it seems to bind me with mighty cables that nothing but omnipotence can break; and yet my love of Country comes over me like a strong wind and bears me irresistibly with all those chains to the battlefield. The memory of all the blissful moments I have enjoyed with you come crowding over me, and I feel most deeply grateful to God and you, that I have enjoyed them for so long. And how hard it is for me to give them up and burn to ashes the hopes and future years, when, God willing, we might still have lived and loved together, and see our boys grown up to honorable manhood around us.
If I do not return, my dear Sarah, never forget how much I loved you, nor that when my last breath escapes me on the battlefield, it will whisper your name.
Forgive my many faults, and the many pains I have caused you. How thoughtless, how foolish I have sometimes been!
But, O Sarah, if the dead can come back to this earth and flit unseen around those they love, I shall always be with you, in the brightest day and in the darkest night....always...always. And when the soft breeze fans your cheek, it shall be my breadth, and the cool air your throbbing temple, it shall be my spirit passing by.
Sarah do not mourn me dead; think I am gone and wait for me, for we shall meet again....
Sullivan Ballou 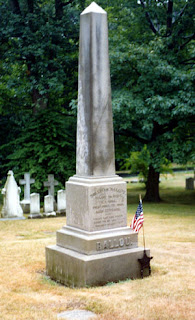 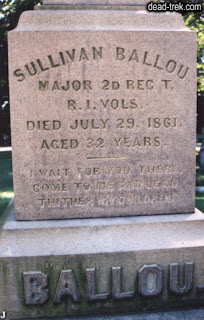 Early life
Ballou was born the son of Hiram and Emeline (Bowen) Ballou, a distinguished Huguenot family in Smithfield, Rhode Island.[1] He lost both of his parents at a young age and was forced to fend for himself.[citation needed] In spite of this, he attended boarding school at Phillips Academy in Andover, Massachusetts. Following his graduation therefrom, he attended Brown University, where he was a member of Delta Phi, and went on to study law at the National Law School, in Ballston, New York. He was admitted to the Rhode Island bar and began to practice in 1853.
Ballou was active in public service. Shortly after being admitted to the bar, he was elected to the Rhode Island House of Representatives, where he served as a clerk, and later as the speaker. He was a staunch Republican and supporter of Abraham Lincoln. Ballou immediately entered the military in 1861 after the war broke out. He became judge advocate of the Rhode Island militia and was 32 at the time of his death at the first Battle of Bull Run on July 21, 1861. When he died, his wife was 24. She later moved to New Jersey to live out her life with her son, William, and never re-married. She died at age 80 in 1917.
Civil War
When war broke out, Ballou immediately left what appeared to be a promising political career and volunteered for military service with the 2nd Rhode Island Infantry. In addition to his combat duties, he served as the Rhode Island militia's judge advocate.
Ballou and 93 of his men were mortally wounded at Bull Run. In an attempt to better direct his men, Ballou took a horse mounted position in front of his regiment, when a 6-pounder solid shot from Confederate artillery tore off his right leg and simultaneously killed his horse. The badly injured Major was then carried off the field and the remainder of his leg was amputated. Ballou died from his wound a week after that Union defeat and was buried in the yard of nearby Sudley Church. After the battle the territory was occupied by Confederate forces. According to witness testimony, it was at this time that Ballou's corpse was exhumed, decapitated, and desecrated by Confederate soldiers possibly belonging to the 21st Georgia regiment. Ballou's body was never recovered.[1]

In place of his body, charred ash and bone believed to be his remains were reburied in Swan Point Cemetery, Providence, Rhode Island. His wife, Sarah, never remarried. She later moved to New Jersey to live out her life with a son, William. She died in 1917 and is buried next to her husband.
Wikipedia


I was in Anissa Jones's(Family Affair) house in Playa Del Rey. There was a book of poetry on living room bookshelf, I noticed that it had a bookmark. I went to the bookmark and found this letter, which has always been one of my favorites. I asked, Anissa's Mom, Paula, who had placed the bookmark there and she told me that Anissa did. It was one of her favorite "poems".
Posted by Brian Keith O'Hara at 1:51 AM

He died a week later