Richard III should be buried with his wife and son in York! 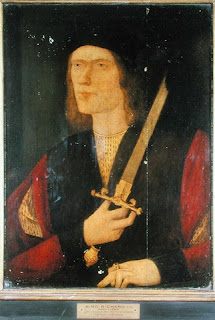 The Tudors went too far in their desecration of Richard III: when one learns that he governed York well for several years, not in the view of the court but of the people who lived in York, that he enacted bail for the poor, that he was, in fact, known for his honesty and sincere religious faith. His brother treasured him as his most loyal subject and Richard NEVER let Edward IV down.
Many people believe that Henry Stafford, Duke of Buckingham, killed the Princes, as Lord High Constable and Governor of the Tower, he had actual physical control of the Tower of London where the Princes were staying. People forget that the Tower also included a royal residence.
Henry Stafford was in fact of Royal Blood himself,  any chance he had to become King depended on their assassination of Edward V and his brother Richard as well as the overthrow of Richard and the neutralizing of Henry Tudor.

Henry's father, Humphrey Stafford, Earl of Stafford, supported the House of Lancaster in the initial phase of the Wars of the Roses. He died in 1458 of wounds after First Battle of St Albans, and his paternal grandfather, Humphrey Stafford, 1st Duke of Buckingham, another leading Lancastrian, was killed at the Battle of Northampton (10 July 1460). After his grandfather's death, Henry was recognized as Duke of Buckingham. The new Duke eventually became a ward of Queen Elizabeth Woodville, consort of Edward IV of England. Sometime before the time of her coronation in May 1465 he was married to her sister Catherine Woodville, Duchess of Buckingham and Bedford (b.1458). Both parties were children at the time; they were carried on squires' shoulders at the coronation ceremony and were reared in the queen's household together.

•Lady Anne Neville, in line to become Queen as the wife of Lancastrian Edward of Westminster, Prince of Wales, eventually did become Queen as the wife of Richard III of England. Her paternal grandfather Richard Neville, 5th Earl of Salisbury was the brother of Buckingham's paternal grandmother (also named Anne Neville), making Buckingham the Queen's second cousin.
Wikipedia


He certainly had motive. He was also a man, like the Stanleys(who fought for Henry Tudor for money, not for England) of no morals or character. Buckingham would do anything which profited him and not do anything which didn't. Buckingham was in contact with Lancastrian and Tudor Ally Bishop Morton(for which there is evidence that Thomas More's Richard III, was in fact written by the Bishop and copied by More, which would explain why Thomas More never published it). Bishop Morton was in contact with Henry Tudor, though their interests might diverge later, the assassination of Edward V and Richard of York profited both men. What was Richard to do if Buckingham killed the Princes? There was nothing he could do. Regardless of who actually committed the murder, he would be blamed for it.
Read Josephine Tey's The Daughter of Time, it asks the questions which were never asked under the Tudors, but must be asked. Why did Henry VII never accuse Richard of their murder or use it as justification for his own rebellion. Why did he wait 20 years to execute the actual assassin?
Richard was the bravest man on the battlefield of Bosworth, all sources are in agreement on this fact. Upon seeing the treachery of the Stanleys, for which they were well paid(by Henry Tudor), Richard personally charged Henry Tudor and his mercenary bodyguard of 200. Cutting an incredible swathe through this phalanx, he was cut down within 8 feet of Henry Tudor. His brother Edward IV was right, he was the bravest man and and among the finest soldiers in England.

Henry Tudor had Richard stripped naked and had his dead body paraded through town. His body was was also subjected to mutilation. No honorable soldier deserves that, certainly none who fought as bravely as Richard did.
It doesn't surprise me that Prime Minister Cameron is looking for a tourist attraction for Liecester. People forget that Henry VIII's desecration of Religious houses, destroyed Richard's resting place, but also desecrated Alfred the Great's grave and body, which is lost to history.
Richard should be buried at York with his wife and his son. Honor demands it.I have one other conundrum which no one has mentioned, from Wikipedia concerning the burial of Mary of York, one of Edward IV's children.
"Mary died at Greenwich on 23 May 1482, and was buried in St George's Chapel at Windsor Castle. In 1789, workmen carrying out repairs in St. George's Chapel, Windsor, rediscovered and accidentally broke into the vault of Edward IV and Queen Elizabeth Woodville, discovering in the process what appeared to be a small adjoining vault. This vault was found to contain the coffins of two mysterious, unidentified children. However, no inspection or examination was carried out and the tomb was resealed and the tomb was inscribed with the names of two of Edward IV's children George, 1st Duke of Bedford died at the age of 2 & Mary of York died age 14 that had predeceased the King. [16] During the excavation for the royal tomb house for King George III under the Wolsey tomb-house in 1810-1813 two lead coffins clearly labelled as George Plantagenet & Mary Plantagenet were discovered and moved into the adjoining vault of Edward IV's but at the time no effort was made to identify the two lead coffins already in the vault. [17] The coffin of Mary was opened, the beautiful girl of fifteen who had died a year before her father; a shock of her pale gold hair had insinuated itself through the chinks of the coffin; the eyes were pale blue and open, but turned to dust however soon after the admission of air.

I once got into a ferocious argument with a British Academic about Julius Caesar and the Gaullic Wars. The argument was whether Caesar acted defensively or were his actions a racist genocide. Rome had been conquered by the Gauls/Celts in 387 BC. They wreaked incredible carnage and slaughter throughout Italy. During the Consulship of Marius, Julius Caesar's Uncle, in 113-101 BC, the Romans fought a horrific war on their northern border with Gaul.  Two tribes, the Teutones and Cimbri, marched towards Rome. They numbered over a half million, including an army of 250,000 ferocious warriors. Even Roman Historians considered the Gauls incredibly ferocious warriors, certainly a match for the Romans and their Legions. Historians now think crop failures in Western and Northern Europe caused this huge migration to southern Europe. Roman General after Roman General was sent to fight the invaders. Each in its turn was defeated by this invading hoard. Finally, the Roman Senate turned to General Marius, who was fighting and winning a war in Africa. It took ten years, with between 150,000-180,000 Roman Dead, before the invasion was crushed but northern Italy was rendered a wasteland.

Roman mothers would frighten their children into being good Romans, by telling them that the Gauls/Celts would come back if they didn't. This is the world that in which Julius Caesar lived and died.

I argued that Oliver Cromwell is regarded in Ireland as the English Hitler. His slaughter of innocent civilians, including children and babies, at Drogheda shows that he believed in situational ethics. Oliver Cromwell was the least Christian General the English ever produced----and a War Criminal too.  He exterminated 1/3 of the Irish population out of pure religious hatred and a desire to persecute, torture and murder. It has struck many people as strange when people call him a believer in Freedom and hero. Ireland was no threat to England, but the English stole it and it was theirs.

Richard governed well and justly. He was not avaricious and cruel, as both Henry Tudor(VII) and Henry VIII were. I always remember Katherine Howard running and screaming trying to reach Henry and plead her defense, but being prevented by Cromwell and Archbishop Cramner.

Richard's Council of the North, derived from his ducal council, greatly improved conditions for Northern England, as commoners of that region were formerly without any substantial economic activity independent of London. Its descendant position was Secretary of State for the Northern Department.
In December 1483, Richard instituted what later became known as the Court of Requests, a court to which poor people who could not afford legal representation could apply for their grievances to be heard. He also introduced bail in January 1484, to protect suspected felons from imprisonment before trial and to protect their property from seizure during that time.

If Richard was responsible for killing the Princes in the Tower, the murders may have caused Buckingham to change sides. On the other hand, Buckingham himself had motivation to kill the Princes, having a claim of his own to the throne equivalent to that of Henry Tudor, depending on one's view of the legitimacy of the Beaufort line. According to a manuscript discovered in the early 1980s in the College of Arms collection, the Princes were murdered "be [by] the vise" of the Duke of Buckingham. There is some argument over whether "vise" means "advice" or "devise"(actions of). According to this perspective, if Buckingham killed the Princes and blamed Richard, he could form a rebellion, putting the throne into play with only Henry Tudor as a rival. Indeed, he was one of the leaders of a rebellion, ostensibly in favour of Henry Tudor, in October 1483. However, the rebellion was quickly crushed and Buckingham executed. Henry Tudor would succeed in defeating Richard III two years later.
Wikipedia

Either way you interpret the word "vise", the word implies that Henry Stafford, The Duke of Buckingham, was involved in the murder; if the first construction as a co-conspirator, the second that it was his act for his own purposes.  Remember that this is a contemporaneous document, written by someone who had intimate knowledge of events. It was discovered in the Ashmolean Museum at Oxford University. One can just imagine the chuckle that Josephine Tey(Elizabeth MacIntosh) and her Detective Alan Grant of Scotland Yard would have with that information. 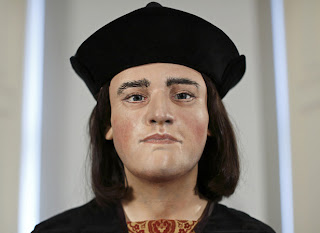 Fascinating, thanks and be sure to keep updating.