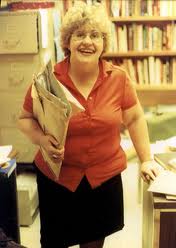 I will never forget my 20th birthday. I was in a large classroom at Georgia State University and walked into Sociology class. Dr. Jackie Boles was late and everyone started talking to kill time. Suddenly everyone turned around and I saw she had a cake in her hands and was singing Happy Birthday! I thought it was very odd, but even odder because it September 18th, my birthday. I had a lot of great professors at Georgia State University.
Dr. Joe Baylen was Chairman of the History Department at Georgia State University. I was lucky enough to have him for a British History course my freshman year. He would always stay after class and talk to his students as equals. That was a wonderful and unique experience. Dr. Baylen said that history was as much about why, as it was about what, and we should always remember that. I remember, that he thought I was somewhat naive about what people were really like. He gave me a copy of the English underground "story" collection "The Pearl". Victorians were a lot less Victorian, than we might think, but much more hypocritical.  He told me that British History was  about Edmund Burke and Winston Churchill, but it was also Oliver Cromwell and "The Pearl".  Remember Magna Carta, but remember Cromwell's genocidal massacre at Drogheda and the  Amritsar massacre where over a 1,000 peaceful demonstrators were attacked by British Imperial Troops in India in 1919.
Dr. Baylen's Obituary:
http://www.historians.org/perspectives/issues/2009/0910/0910mem1.cfm
Dr. John Alexander(Johns Hopkins) of the History Department who invited me to go on an archeological expedition with him to Potideia Greece while I was an undergraduate. If I only had the money. I also remember that he graded my last under graduate paper and gave me and A+. He loved History and it was contagious.
Dr. Mike Mescon Chairman of the Management Department, who was and is the most dynamic professor/teacher I have ever met.  He and his enthusiasm greatly tempted me to change my major to business. I was the mailman for his department, but he took time to talk with me because he loved being a teacher and it showed.
Dr. Paul Johnson, History Department, he treated interested students like colleagues. I remember that he had met Kurt Schuschnigg, the Austrian Chancellor who was bullied in person by Adolf Hitler and presided over Austrian unification with Germany: Anschluss. Nicholas II of Russia was very often an ineffective ruler, but with President Teddy Roosevelt the driving force in the Geneva and Hague Conventions. Trying to bring civilization to the rules of war and warfare.  He made history real, by talking about real people who they really were and why they did things.
President Dr. Noah Langdale was what a college president should be. I delivered his mail and he remembered my name. I remember every year he would go down to the Georgia Legislature and fight to hold down tuition and other costs for HIS Students, because his students worked their way through school and he was there to help them finish that task. I remember that he fought to keep our B and D Cafeteria because they served home cooking. Most of us worked full time and didn't have the luxury of home cooked meals. As soon as Dr. Langdale retired after 30 years as President, "they" brought in fast food because they didn't give a damn. One more note about Jackie Boles, she was a force of nature in the classroom. If I knew anyone who was bored, faltering or burned out and in danger of not continuing their education, I would tell them to take a course from Jackie Boles. She made education fun, and, believe it or not you learned something. Sometimes you learned a great deal, one of the great teachers who not only encouraged question,  but answered them enthusiastically. All of these teachers were great educators and great friends.
Posted by Brian Keith O'Hara at 10:53 PM