Billy Tate was The Bravest Pony Express Rider, if you had asked Buffalo Bill Cody or Wild Bill Hickok 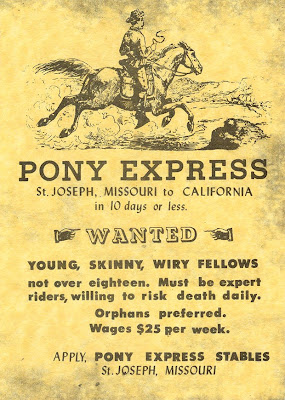 Advertisement for the Pony Express:

Oath sworn to by all Pony Express Riders:

While I am the employ of A. Majors, I agree not to use profane language, not to get drunk, not to gamble, not to treat animals cruelly and not to do anything else that is incompatible with the conduct of a gentleman. And I agree, if I violate any of the above conditions, to accept my discharge without any pay for my services.


Surprisingly, though, the 183 riders, aged 11 through the mid-40s, despite the ad, survived pretty well. Only one was killed by Indians, but even his mail was delivered to the next station, when his horse arrived rider less at the next station. It took 10 days for the mail to be delivered from St. Joseph, Missouri to Sacramento, California.
http://www.bigsiteofamazingfacts.com/how-many-pony-express-riders-were-killed-by-indians-and-outlaws-in-the-american-old-west 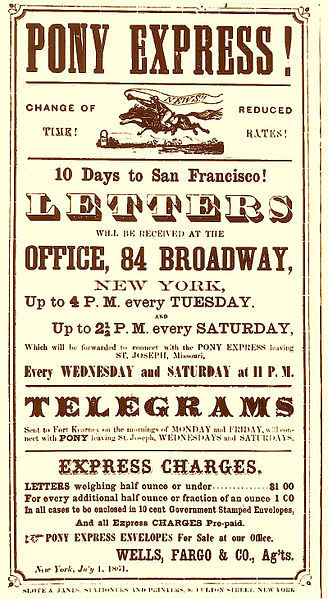 Because of the extreme weather and the fact that a great deal of the trail involved riding through the desert alone, a danger which was further amplified by the threat of marauding desperadoes and wronged Indians, and that fact that help could be as far as 10 miles or a couple of hours away(the distance between way stations) the riders were paid $100-150 a month, equivalent to about $2,000.00 in today’s money.

The Pony Express was a mail service delivering messages and mail from St. Joseph, Missouri across the Great Plains, over the Rocky Mountains and the Sierra Nevada to Sacramento, California by horseback, using a series of relay stations. During its 18 months of operation, it reduced the time for messages to travel between the Atlantic and Pacific coasts to about ten days. From April 3, 1860 to October 1861, it became the West's most direct means of east–west communication before the telegraph was established and was vital for tying the new state of California with the rest of the country. Wikipedia

With the expansion of train service through the west and completion of the last major telegraph line from Omaha, Nebraska to Salt Lake City, Utah on October 18, 1861 the need for the Pony Express evaporated. The Pony Express could not compete with these much less expensive alternatives. So after only 18 months of operation, The Pony Express went out of business. 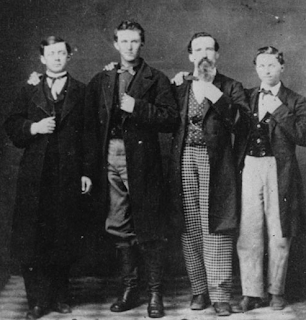 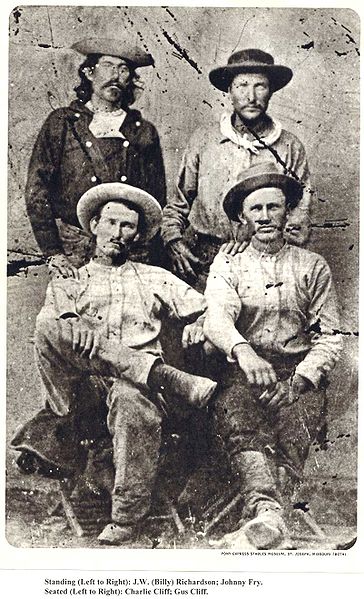 There is some debate whether the first rider of the Pony Express was Billy Richardson(back row, left) or Johnny Fry(next to him). Johnny Fry has another claim to fame. His girlfriend worked at one of the stations on his route. To give him food which he could eat along his route, she took fried bread, which had been very popular in America since Colonial days, and made a hole in it so he could grab it and hold on to it as he rode, effectively inventing the doughnut/donut as we now know it.
http://www.xphomestation.com/jfrey.html

Billy Tate was a 14-year-old Pony Express rider who rode the post trail in Utah and Nevada through the Ruby Valley. During the Paiute uprising of 1860, he was chased by a band of Paiute Warriors on horseback. At some point Billy was forced to retreat into the hills behind some rocks. Somehow this fourteen-year-old boy was able to hold out against the war party, even taking down seven of his assailants before being killed himself. His body was found riddled with arrows, but he was not scalped, which was a sign that the Paiutes honored their enemy.
Wikipedia