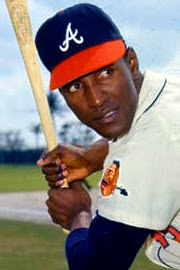 In 1969 I saved box tops from Post Raisin Bran and got a free ticket to an Atlanta Braves Baseball Game. With the passage of so many years, I don't even remember who won or lost. But there is one thing that I remember.
In 1967, Rico Carty was struck down with Tuberculosis. He had begun his career with the Braves in 1964 and showed great promise, batting .330 and finishing second to Roberto Clemente in the batting championship. Everyone assumed that his career was over after contracting tuberculosis, but they failed to take into account his character and determination. When he returned to the Braves in 1969, he batted .342, but 1970 was even better, Rico batted .366 and won the batting championship(the highest batting average since 1957 when Ted Williams batted .388).
After the game, some of the players "hung around" to sign autographs, for us kids. Some signed autographs like automatons, without comment and encouragement, most of them left only after a few minutes; some signed politely and moved on to the next kid as quickly as they could, they also left early; a few engaged in actual conversations, but eventually they also left; only one stayed until every kid who wanted an autograph got one. He was Rico Carty.
He also engaged us in real conversations. If you played baseball, he wanted to know what position you played, but also what your grades were. If you didn't play baseball, he wanted to know why. He preached a variation of: "Mens sana in corpore sano," to have a healthy mind you had to have a healthy body. Even through his think Spanish accent and his Dominican Republic dialect we knew what he was saying, because he was speaking our language.
When he got to me, he asked whether I played baseball or not. I was kind of "geeky" looking so I guess my athletic prowess was open to some doubt. I wasn't offended, because you knew he really cared. There wasn't a false note, nor an ounce of phoniness in Rico. He was what he was. And that was what made him so wonderful to us.
I said neighborhood games mostly. He said that there was nothing wrong with that. His happiest memories were playing baseball with his friends as a kid; by High School, Baseball had become a career. He missed those games from his childhood. He told me that there was nothing wrong with reading books, but as soon as I got through with one, I should call my friends and get a game started.
Rico Carty was never a star, he was one of us: he was just a good guy, who became a great baseball player. That was to be expected, because we knew that he already was a great man. But, more importantly, as that last kid left got his autograph, we knew, which was better, that he was a good man. And being called good is a far better complement than being called great. 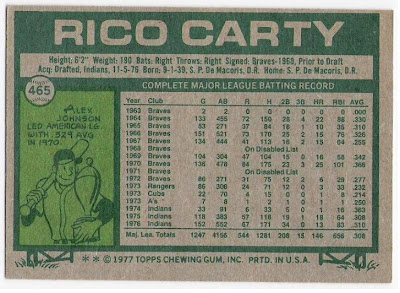 you made my dad cry!

wasn't Rico Carty the player beaten by the Atlanta police in a case of mistaken identity in 1967 or so?

uncle rico. rico carty is my relative. he is my dad's second cousin. we met him when i was 9 years old when you began to play for the toronto blue jays.

he was amazing with us. his distant relatives that escaped slavery via a ship sailed to new brunswick. that man, my great great grandfather, and rico's grandfather were brothers.

so we reconnected in the late 70's, he signed balls and programs and we had vip tickets as long as he played here.

trying to reconnect with him. i can be reached through http://stevecarty.com

Steve:
New Brunswick with the Loyalists after the American Revolution ? That's where my Loyalist forebear emigrated ino what was then Nova Scotia and got changed into New Brunswick, Canada in 1783.
Jim Carty

Steve:
New Brunswick with the Loyalists after the American Revolution ? That's where my Loyalist forebear emigrated into what was then Nova Scotia and got changed into New Brunswick, Canada in 1783.
Jim Carty

Great post. I dig Rico. I updated a blog about him here:
http://oldbaseballcards-jont.blogspot.com/

Great memories are all we have!