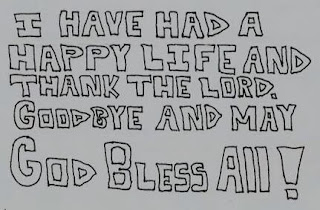 Happiness is only real when shared!


Russ,
I really enjoy all the help you have given me and the times we spent together. I hope that yo will not be too depressed by our parting. It may be a very long time before we see each other again. But providing that I get through ths Alaskan Deal in one piece you will be hearing form me again in the future. I’d like to repeat the advice I gave you before, in that I think you really should make a radical change in your lifestyle and begin to boldly do things which you may previously never have thought of doing or been to hesitant to attempt. So many people live within unhappy circumstances and yet will not take the initiative to change their situation because they are conditioned to a life of security, conformity, and conservatism, all of which may appear to give one piece of mind, but in reality nothing is more damaging to the adventurous spirit within a man than a secure future. The very basic core of a man’s living spirit is his passion for adventure. The joy of life comes from our encounters with new experiences, and hence there is no greater joy than to have an endlessly changing horizon, for each day to have a new and different sun. If you want to get more out of life, Ron, you must lose your inclination for monotonous security and adopt a helter-skelter style of life that will at first appear to you to be crazy. But once you become accustomed to sch a life you will see its full meaning and its incredible beauty. And so, Russ, in short, get out of Salton City and hit the Road. I guarantee you will be very glad you did. But I fear that you will ignore my advice. You think I am stubborn, but you are even more stubborn than me. You had a wonderful chance on your drive back to see one of the greatest sights on earth, the Grand Canyon, something every American should see at least once in his life. But for some reason incomprehensible to me you wanted nothing but to bolt for home as quickly as possible, right back to the same situation which you see day after day after day. I fear you will follow this same inclination in the future and thus fail to discover all the wonderful things that God has placed around us to discover. Don’t settle down and sit in one place. Move around, be nomadic, make each day a new horizon. You are still going to live a long time, Russ, and it would be a shame if you did not take the opportunity to revolutionize your life and move into an entirely new realm of experience.

You are wrong if you think Joy emanates only or principally from human relationships. God has placed it all around us. It is in everything and anything we might experience. We just have to have the courage to turn against our habitual lifestyle and engage in unconventional living.

My point is that you do not need me or anyone else around to bring this kind of light in your life. It is simply waiting out there for you to grasp it, and all you have to do is reach for it. The only person you are fighting is yourself and your stubbornness to engage in new circumstances.

Russ, I really hope that as soon as you can you will get out of Salton City, put a little camper on the back of your pickup, and start seeing some of the great work that God has done here in the American West. you will see things and meet people and there is much to learn from them. And you must do it economy style, no motels, do your own cooking, as a general rule spend as little as possible and you will enjoy it much more immensely. I hope that the next time I see you, you will be a new man with a vast array of new adventures and experiences behind you. Don’t hesitate or allow yourself to make excuses. Just get out and do it. Just get out and do it. You will be very, very glad that you did.

http://www.backtothewildbook.org/summary.html
The best book about Chris, his words and his pictures.
If you ever wondered why Chris meant so much to Russ. This happened to Russ right before he met Chris:
Accused Killer of Wife Failed to Report Her Missing, Court Is Told
December 18, 1991|TOM GORMAN | Los Angeles TIMES STAFF WRITER

A man accused of killing his estranged wife and dumping her body over the side of a cliff near Borrego Springs showed little concern over his wife's safety when she was missing, the victim's sister testified Tuesday.

June Edwards, who lived in an apartment unit adjoining her sister's, testified at a preliminary hearing that, while family and friends searched for Grace Burrus, the victim's husband, John Burrus, went shopping for clothes so he could fly to Alaska to check on apartments he owns there.
Russell Fritz, a caretaker for apartments that John Burrus owns at Salton City, testified that, when he asked his boss whether he had called authorities about his wife's disappearance, John Burrus said he hadn't.
The San Diego County district attorney's office alleges that John Burrus, now 69, killed his 75-year-old wife on the night of June 26, 1990, or early the next morning at her apartment in Oceanside, then put her body in her car, drove it toward Borrego Springs, and pushed it over the side of county highway S-22 on the Montezuma Grade.
The couple were within nine days of a divorce hearing, and prosecutors allege that the property settlement was the motive for the killing.
The defense claims that Grace and John Burrus had happily spent the night together, reconciled their differences, had drinks, and that each left Oceanside the next morning in separate cars for Salton City. Once there, John Burrus was going to leave his car and be driven back by his wife to the airport so he could fly to Anchorage to check on his apartments.
Grace Burrus either was killed when her car crashed over the side of the highway or was slain, defense attorney Herb Weston said.
According to testimony Tuesday, John Burrus drove to the Salton City apartments the morning of June 27 and asked Fritz, his caretaker, if he had seen Grace, because she had an hour or so head start on her husband. He hadn't, Fritz said, and John Burrus returned to Oceanside.
The next morning, Fritz testified, he called John Burrus to see what he had learned about his wife.
"I asked him if he called the authorities," Fritz said. "He said it wouldn't do any good to call because it hadn't been 24 hours."
Edwards said she first learned of her sister's disappearance the night of June 27, 1990, when Burrus returned from Salton City to Oceanside. She, not Burrus, called relatives to figure out what to do about Grace's disappearance, she said, "because I wanted to see some action. . . . He said he wasn't going to call anybody until after 8 o'clock the next morning because she had to be missing more than 24 hours before they'd do anything."
On the morning of June 28--at about the time Grace Burrus' nephew and niece had found her body--John Burrus asked Edwards to stay near the phone for news so he could go shopping, she said.
"He said he didn't have any luggage because it was all either in Alaska or at Salton City," she said.
Edwards testified that, although she normally heard her sister's voice or television in the evening in the adjoining apartment, it was quiet the night of June 26.
Overnight, she said, she heard more than one male voice--including one she assumed to be John Burrus'--coming from the adjacent apartment but didn't hear Grace's voice. Nor did she hear or see Grace the next morning, as she typically would, she said.
Much of Tuesday's testimony was focused on the clothing Grace Burrus normally would wear, including a bra and running shoes. When her body was found, she was braless and had on clog-type shoes.
Weston suggested outside the courtroom that Grace Burrus was somewhat drunk when she left her apartment that morning and didn't dress herself as she customarily would have.
Grace Burrus' nephew, Bill Edwards, said that, when he talked to John Burrus within hours of having found her body, Burrus had scratches that appeared fresh on the back of his neck and on his leg.
Weston criticized the prosecution for what he said was a lack of evidence against his client, and said a county grand jury last summer had refused to indict John Burrus on the same charge.
The preliminary hearing before Vista Municipal Judge Michael Harris is expected to conclude today.

After such a betrayal, Chris was probably the only person who could bring light back into his life. No wonder he wanted to adopt Chris. In memory of Russ Fritz a decent human being. Hopefully there is a Russ in your life too.

Did you know that Billy the Kid was once a legally deputized officer of the Law? If not, here is the true story of Billy McCarty: http://briankeithohara.blogspot.com/2014/11/billy-kid-was-more-likely-to-kill-off.html
Posted by Brian Keith O'Hara at 1:26 PM

You have a good blog. I ran acros it by accident and have read your posts. If you are still writing, I wish you would update it more often.

Simply want to say your article is as surprising.
The clarity to your put up is simply excellent and i
can assume you are knowledgeable on this subject. Well along with
your permission allow me to snatch your feed to keep up to date with
imminent post. Thank you 1,000,000 and please continue the gratifying work.

Thanks for sharing this!