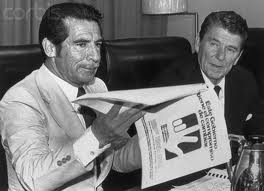 Under enormous pressure from the US Military and CIA, a Guatemalan Judge intervened and shut down the War Crimes Trial of Rios Montt a few weeks ago. Rios Montt was a member of the Junta which ruled Guatemala in the 1970's and 80's. He has been accused of War Crimes, Atrocities and Crimes Against Humanity.
He attended the US Military School of the Americas in Columbus, Georgia. That is the school that Martin Sheen tried to shut down, for exactly this reason.
Rios Montt became an Evangelical Christian while training in Columbus. The Guatemalan military dictatorship was plagued with insurrections and revolts. General Montt declared that he could solve the problem. The challenges to the Junta's rule was caused by the Catholic Church and impoverished Mayan Indians. His fellow Generals allowed General Montt to implement his plan to pacify the country. He proceeded to exterminate 500,000 Catholic Mayan Indians. One of the most horrible stories from this genocide was that his army would take babies and throw them up in the air and use them for target practice. Documents show that Rios Montt believed that the only way the Junta could rule was to exterminate the Mayan Indians and silence the Catholic Church.
We now know, thanks to the Freedom of Information Act, that President Ronald Reagan knew exactly what was going on and continued to give the Generals Foreign Aid and technical assistance.
In the last few days, the judges order shutting down the trial has been overturned by the Guatemalan Supreme Court, the trial will be re-opened on May 7th. Though 86 years old, this evil man must be made to pay for what he did.