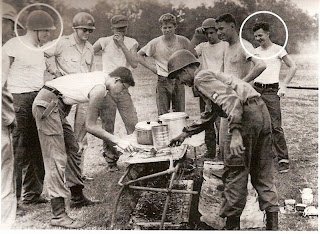 I remember how Republicans attacked Jim Garrison for suggesting that Republicans were involved in a conspiracy to assasinate President Kennedy. He pointed out two people in particular, who had close ties to Anti-Castro Cubans, David Ferrie and Clay Shaw both of whom he contended were members of the CIA. Denials from the CIA and the Justice Department confirmed that Republicans were right.
Long after Jim's death the picture above came to light, proving that David Ferrie knew Lee Harvey Oswald. We also know that the Russians always believed that Oswald was CIA. That is from Kremlin Files. We also knew that on his own volition George Bush Sr. went to the Dallas Police and volunteered to help and provided his own alibi for the time of the killing. When no one asked him for an alibi. This was at a point that we know that Bush was CIA and has lied about it ever since. We now know that Clay Shaw and David Ferrie were CIA. So the several membeers CIA committed perjury. We also know that J Edgar Hoover committed Perjury.
Jim Garrison was an honest man and he told the truth.
Posted by Brian Keith O'Hara at 7:18 PM