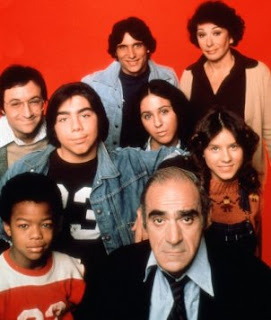 I was listening to the radio the other day when Barbra Streisand came on singing one of my favorite songs, Evergreen. It brought to mind one of those odd memories which make the ordinary extraordinary. I remember that there was a show years ago called "Fish" starring Abe Vigoda. It was a spin off of Barney Miller. The acting wasn't that good, but the writing was worse. Totally forgettable. I think I only watched it one or two times before giving up on it. But one night I was channel surfing and I came across one scene which has staid with me the thirty years since I saw it.
Sarah Natoli playing the character Diane Pulaski is a lonely, unhappy girl. She is not particularly attractive and certainly not popular. I think that the story line was that some boy had hurt her feelings. Though the show wasn't a musical, Sarah is shown singing "Evergreen". Evergreen is one of the most beautiful songs Barbra ever wrote. Sarah sings beautifully and with as much passion and feeling as Barbra Streisand. It was an incredible moment. I've never seen that episode again and, yet, that particular scene and the memory of Sarah Natoli's singing will never leave me.
Posted by Brian Keith O'Hara at 7:00 PM

I too, remember Sarah singing Evergreen. It was great. Sarah was my favorite actress on that show. I wish she had more lines in it though.

It is the Anniversary episode and it is now posted on youtube. She does sing Evergreen beautifully.