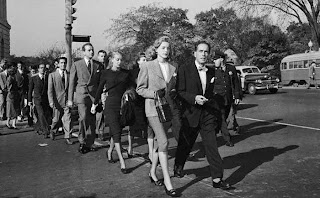 I always remember the story of how George W. Bush almost flunked out of flight school during his "military" service, then telling everyone that he volunteered to serve in Vietnam. The only problem with the story, he made sure to volunteer when it had already been announced by the Pentagon that no new pilots were going to be sent to the war. That is probably as brave as any coward ever gets. Unless you count Evangelist Pat Robertson. When Pat Robertson ran for President in 1988, he bragged about his military service in Korea. If you listened to Pat he was a man of God and a true Christian Soldier, brave, fearless and a leader of men. Well, that is until Republican Congressman Pete McCloskey revealed the truth about Robertson's military service. Pat Robertson's Dad was a US Senator from Virginia. Whose only claim to fame was he opposed every Civil Rights law ever passed in the US. In fact, Pat Robertson's Dad was declared a Hero of the KKK.
Senator Robertson pulled strings so that his son didn't end up where the fighting was. Daddy got Pat assigned to a detail which delivered alcohol to Officer's Clubs behind the lines during the war. While men such as "The Rockford Files" James Garner served honorably and bravely in the trenches of the Korean War, watching his friends and buddies wiped out by the Communists, Pat cowered/coward in fear leaching off the bravery of the real men who fought there and died there. Republican Pete McCloskey was a real hero serving with honor in Korea. When he heard Pat Robertson lying about his record, he is quoted as saying, he didn't give a damn whether he won or lost the Republican Nomination, but he intended to make sure that everyone knew the truth about the coward that Pat Robertson was.

But Humphrey Bogart (Bogie), John Houston and Lauren Bacall were real heroes. They prove that you don't have to be on a battlefield to earn the "red badge of courage". With Richard Nixon and his anti-Communist, Anti-Jewish, Republican Witch Hunts of the late 1940's, a lot of innocent people saw their lives and careers ruined. Most people didn't have the courage or the character to stand up to Nixon and his fellow Republicans. A few did. They risked everything standing up for what was right. Republicans smeared and slurred these brave few. Pictured here Humphrey Bogart and Lauren Bacall prepare to testify before Congress against the activities of HUAC. Bogies friends advised him that he might never work again, but he forcefullyresponded that some things are more important than work.
Pastor Niemoller, Lutheran Pastor, Anti-Nazi and Dachau Death Camp Survivor(1946)
"First they came for the Communists, and I didn't speak up, because I wasn't a Communist. Then they came for the Jews, and I didn't speak up, because I wasn't a Jew. Then they came for the Catholics, and I didn't speak up, because I was a Protestant. Then they came for me, and by that time there was no left to speak up for me."

I don't know if you are able to go back and edit old entries. If so, you might want to change "Pat coward in fear" to "Pat cowered in fear"