Michael McNamara was AMAZING and almost no one knows it.

I love old game shows, because it is great way to see stars of yesterday, along with some good, clean, clever dialogue. I must admit to having watched hundreds of episodes, with several sticking out in my mind.  Two episodes of  "I've Got A Secret" in particular caught my eye and I thought I would share the information that I gleaned from Youtube.

Michael McNamara was a "Equilibrist" who had won Ted Mack's Amateur Hour Talent Show at age 11. He was from Crown Point, RFD, Ironville, New York. He had learned his field from an artist with the county fair. When asked, Michael said an old guy taught me. When pressed by Gary Moore, he said that the guy was about 30. You could hear the groans among the panel.
Michael was scheduled to appear on the Steel Pier at Atlantic City during the Memorial Day Break from college.  He had already appeared in major venues in Los Angeles, Chicago, Minneapolis and New York.  He appeared twice on "I've Got A Secret", at age 13 and again at age 15, and both times charmed and stumped the panel.

Unfortunately, Michael never had a chance to display his unique talent as an adult.

"Michael and a friend, Paul Frolich, also a student at St. Procopius College, were walking at the side of the road in Naperville, Illinois when an approaching car went out of control. Michael immediately pushed his friend out of the way, just in time, saving his life.  Unfortunately, because of this decision, Michael received the full force of impact from the careening automobile. He sustained a shattered skull and two fractures of his right leg as he was slammed against a brick wall.  He remained in a coma until he died after 8 days in the intensive care unit."

He saved his friend's life at the cost of his own. Michael knew the real definition of friendship: he lived it and was willing to die for it. But more than that, the impact of losing such a accomplished young man, because few have had more promise than Michael did, made the pain of losing him all the worse. He was a member of the generation which went to war in Vietnam. His sacrifice was as honorable as any soldier's, because he chose to do the right thing for the right reason. His parents and his brother and sister, rightfully, should be proud of Michael, who was a real hero.

He lies buried in a grave in Torrington, Connecticut 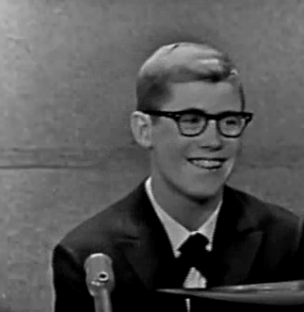 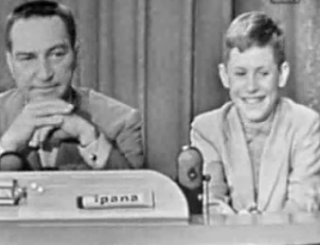 I spoke to Arlene Francis and Martin Gabel's son,  Peter, and told him that the thing that struck me from watching his mother and father, as well as, Benett Cerf, John Daly and Dorothy Kilgallen was how nice they were and that you could tell that they were truly pulling for contestants to win. When Peter and Benett Cerf's son, Jonathan, appeared you could tell how proud each of the panelists and John Daly, the host, were of the boys and their success as editors of the Harvard Lampoon(Peter went to Deerfield prep, Johnny Gunther's Alma Mater).  Many people credit Peter and Jonathan for laying the foundation for the talent and ambience which helped create The National Lampoon.
And I told Peter that I had come to the conclusion that we were much nicer people then. Peter agreed. 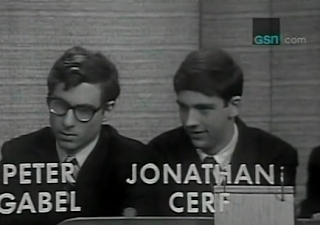 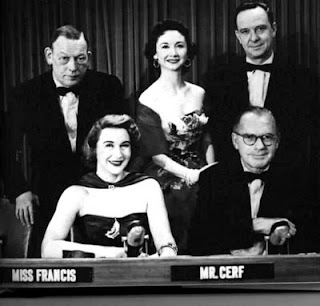 "And I told Peter that I had come to the conclusion that we were much nicer people then." And classier.

That's why I enjoy watching re-runs of these old game shows. They had fun. It wasn't about money or winning. I noticed these things when I watched them at age five in the mid 1950s. The panelists were highly educated and accomplished. It showed.

I watched tonight, September 5, when the cast of What's My Line eulogized Fred Allen who had died suddenly the day before. Very moving. After watching I've Got a Secret, I googled guest Michael McNamara to see how his life turned out. Tragically as it turned out. Thanks for posting the informations.

I was looking for information on Michael when I came across your article. My Stepfather is Paul, the friend that was walking with Michael when a drunk driver hit them. His name is Paul Froehle, not as it is spelled in the article but nevertheless I was curious about the accident and I'm glad to run across the Youtube videos and this article. Thanks.

I watched the video of Michael and you got a sense that he was a good kid. I couldn't find anything about him anywhere on the internet, so I did some serious research and found the news story. He was a real hero and deserves to be remembered, if in some small way I gave him that then I have done something right and good. I'll never forget you, pal. Nor, will anyone who knew you. They will miss you, their friend, every day of their lives. And that is the highest complement one human being can pay another.
Brian

You definitely notice that the panel and host are not loud and talking over one another as in todays shows. I love hearing Arlene speak. Such a great voice and so pretty. I enjoy all the YouTube clips from What's My Line. It was a kinder more gentle time.