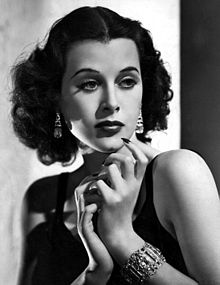 Hedi Lamarr is most famous for her first acting which required her to swim in the nude in  Gustav Machatý's Ecstasy in 1933. She was born in Austria in 1913. She married an Austrian Industrialist Frederich Mandl at age 19. Her husband entertained Adolf Hitler, Herman Georing and Benito Mussolini. On the eve of the Austrian-German Anschluss, she fled to America. But she isn't just known for this or her career in Hollywood.


A Mathematical Genius and Beautiful Too


Avant garde composer George Antheil, a son of German immigrants and neighbor of Lamarr, had experimented with automated control of musical instruments, including his music for Ballet Mécanique, originally written for Fernand Léger's 1924 abstract film. This score involved multiple player pianos playing simultaneously.
Lamarr took her idea to Antheil and together, Antheil and Lamarr submitted the idea of a secret communication system in June 1941. On August 11, 1942, US Patent 2,292,387  was granted to Antheil and "Hedy Kiesler Markey," Lamarr's married name at the time. This early version of frequency hopping used a piano roll to change between 88 frequencies and was intended to make radio-guided torpedoes harder for enemies to detect or jam. Although a presentation of the technique was soon made to the U.S. Navy, it met with opposition and was not adopted.[16]
The idea was not implemented in the USA until 1962, when it was used by U.S. military ships during a blockade of Cuba after the patent had expired. Perhaps owing to this lag in development, the patent was little known until 1997, when the Electronic Frontier Foundation gave Lamarr an award for this contribution. In 1998, Ottawa wireless technology developer Wi-LAN Inc. acquired a 49 percent claim to the patent from Lamarr for an undisclosed amount of stock (Eliza Schmidkunz, Inside GNSS). Antheil had died in 1959.
Lamarr's and Antheil's frequency-hopping idea serves as a basis for modern spread-spectrum communication technology, such as Bluetooth, COFDM used in Wi-Fi network connections, and CDMA used in some cordless and wireless telephones. Blackwell, Martin, and Vernam's 1920 patent Secrecy Communication System (1598673) seems to lay the communications groundwork for Kiesler and Antheil's patent, which employed the techniques in the autonomous control of torpedoes.
Lamarr wanted to join the National Inventors Council but was reportedly told by NIC member Charles F. Kettering and others that she could better help the war effort by using her celebrity status to sell War Bonds.
Wikipedia
Posted by Brian Keith O'Hara at 1:08 PM